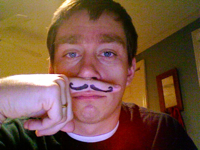 Here's my life in a timeline:

This site's built on Google App Engine. As soon as I heard about it and watched a campfire video they did, I knew I had to get in there and play with it. I love coding and building websites, but hate all the rest: hosting, databases, caching, dns, email, etc. Plus, I've always been intrigued by Python, so it was a good chance to play with a new language. The old version of this site was in C# and was an experiment on making a dynamic site with as few files as possible. It was one default.aspx page and one xml file. Sinatra looks pretty cool too. Had I known about it when I was building this site, I might have gone that route.

One big catch in converting the site over to App Engine was the fact that Google limits the size of your files, and since I put my songs up here too, I had to figure out hosting for them, but I'd also been wanting to noodle with Amazon S3, so that was a no-brainer. My hosting costs have gone from about $10 a month with Brinkster to maybe ¢20 (just for S3 - App Engine's free). Also, since I've jumped ship to Mac, and use Transmit for FTP, they have S3 support built right in, so it's all been gravy so far. I've been taking Git a spin for version control too. For most of what I do (lone-wolf developer, a handful of commits, not much branching), I don't notice much advantage of Git over Subversion, but it works well and its easy to use with GitHub.