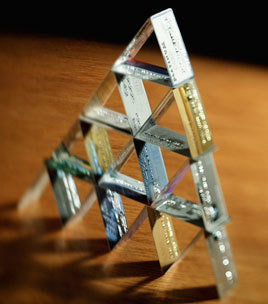 Why is it sad that homeprices are down X percent, or that the stock market has dropped Y percent, if they were way overpriced in the first place? I'd call that good and normal. Houses don't normally appreciate by 50% in a year. That's not normal. If you can make some sweet bread on a sale like that, good for you, but it's an aberration and deep down, people know this. Are we that deluded, or does the media just distort things for the sake of melodrama?

My Take On How We Got Here

It's the year 2000, a sham stock market fluffed up by computer companies that had no business even being listed on a stock exchange were flying high on insane valuations, and surprise! It all came crashing down once reality woke back up from the Mickey it had been slipped. If you're The Man, and you're looking at some stout inflation and a possible recession, you're looking for ways to stick some jumper cables on the nads of the economy. Maybe you suddenly think "you know, houses are awesome and everyone should own them, regardless of whether they can afford or pay for them or not", and you ratchet the interest rates down, tell Fannie and Freddie to start handing out loans like lollipops, and BAM! instant market activity.

Then, since everybody and their mom is buying a house nowadays, there just aren't enough houses to go around and the prices climb quickly. If you bought a house a long time ago, you're siting on a goldmine, and if you just bought one, you can sell it in a year and make a handsome profit. Win win! This has salutary effects too: since no red-blooded American can use someone else's appliances or decor, you just have to rip out the kitchen and the bathroom and redo the whole thing in stainless and corian. And so it goes. Banks know all this loaning to people who are over their heads is risky, but #1 they're greedy, and #2 they figure that if they essentially trash-compact it all into a security, and sell it to foreigners, the risk will be mitigated, or at least it'll be someone else's problem. They rationalize that it won't blow up, or if it does it'll be a flaming turd on someone else's doorstep at least.

Alas, at some point, you wake up hungover on a picnic table somewhere, and that's just where we are. We've woken up, loosely surveyed the situation, and are on the way home. What remains to be seen is whether our wallet was stolen, or we're pregnant with who knows who's kid. I don't think we're fully aware of what all's gone down just yet. It might not be that bad, or it might be pretty terrible. America's a wild and loose chick, and my gut says we're in for some hurtin' before it gets better.

I think The Man and Wall St knew what they were doing, but were just too shortsighted or greedy to quit. It's easy to point fingers at Wall St., and comical when it's coming from Congress, considering that they were the ones that lit the match to this thing in the first place, but that's not the whole story. Joe Sixpack's pretty guilty too. To a degree, we might let him off the hook for being gullible, but even still, gullible's not a virtue. It's still a bad thing to be. I think most folks knew they were spending more than they made, or that a 5-year ARM was gonna bite 'em in the ass unless they played their cards just right, but took the chance anyway, for basically the same reasons as The Man and Wall St.: greed and shortsightedness. My heart goes out to the folks that are really in a bind, but let's be honest: do we really need half the stuff or square feet that we have? Families in the 50s had twice the kids and half the space.

Where Does That Leave Us?

Well, assuming we've still got a rough road ahead, it means brace yourself. Might be wise to pre-emptively cut it to the bone and take stock of things that aren't necessary, or are moneydrains. And save - It's not what you make, it's what you keep. The thing about the credit crunch, is that it gets solved by us saving more. Banks use this money to lend, and as I understand things, having money to lend is essentially grease to the gears of the economy. Doesn't guarantee that the economy will go into overdrive, but it won't seize up at least. This is why the Feds are printing money like there's no tomorrow - and what will keep us from a 30's-style depression. It's a double-plus because a country full of folks with money saved up is a country full of folks who can handle their business and are able to weather an economic storm or two.

The pessimist in me can't help but wonder how a nation can last that prints gobs of money, ships all of its manufacturing overseas, and finances its debt by selling itself little by little. Sure we're a "service economy", and in theory a nation of accountants and hotel managers is progress, but what happens when the chips are down and we have to fight a serious war and fend for ourselves? It's hard for me to shake the thought that we're like a spoiled playboy that's living off his parents' hard earned money, and there's a bucket of cold reality with our name on it coming this way. Is it too late to turn the ship, or does something really nasty have to happen before we wake up?