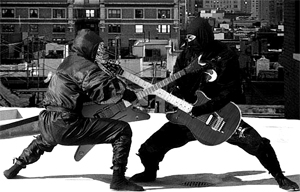 I'm wrestling these days with the "jack of all trades, master of none" idea. On the one hand, if you're interested in poetry, drag racing, architecture and antique clocks, people would say you're a Renaissance man. But you'd also have your fingers in so many pies that you'd never really master any of them. On the other, if you devote everything youv'e got to just one thing, you'd be the top dog and a ninja at it, but you'd be one-sided. I can't really focus on just one thing for decades - I'd go nuts.

I like to do, and know lots of things, but I don't like the thought of just being average or below average at them. I guess I can play a mean Trivial Pursuit or Jeopardy because of it, but that doesn't really pay the bills.

Having just finished Born Standing Up - A Comic's Life by Steve Martin, I was mostly struck by how his overnight success was anything but. He was out there for years, touring, tweaking his act, getting his ass kicked at awful clubs and crowds of Japanese tourists. Overnight success takes years.

So I come back with the quandary of staying focused without getting bored. I've been playing guitar for almost 20 years, and I love it dearly, but if I had to do it all day, every day, I'd get sick of it. But that's almost what you've gotta do if you wanna scale the the mountains of things like Recuerdos de la Alhambra. If you wanna master something, prepare for a long and arduous climb. Mastery is a good book if you're on such a journey and getting discouraged. I love how it lays out the idea of the initial quick ramp up, then a long and boring valley where seemingly no progress is made, and then the next ramp up. Certainly jives with what Steve Martin was talking about.