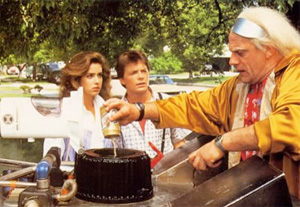 When are we gonna run out of oil? Never.

It'll get too expensive and we'll move on to something else. There will still be oil, just nobody will want it anymore, or at least not much of it. Plus, we're inventing all kinds of crazy ways to get oil out of things that used to be prohibitive or impossible, like Canada's oil sands or oil shale.

When oil from Saudi Arabia or Brazil is $50 a barrel, it makes no sense to bother with Canadian oil sands which might be $90 a barrel, but once it climbs to $150, the game changes. Should we ever wind up extracting and exhausting all sources of oil, the price of it would go through the roof, and we'd just move on to something else.

It'd work a lot like R-12 refrigerant when they phased it out around a decade ago: once they stopped making it, the price skyrocketed and you either converted to R-134a or paid a ton for a little bottle of it. But it's still out there. If you want some R-12, you can still get it - it's just a pain in the ass and not feasable any more.

The same thing will happen to oil if it ever runs out.