Words To Golf AND Live By 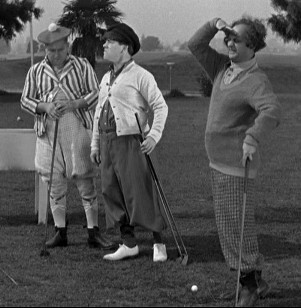 I played golf last weekend, and did a little better than usual. Still sucked, but the wheels didn't fall off like they often do. I also just read Seven Simple Steps to Realizing Your Dreams and it struck me that last weekend when I played, I had a gameplan and stuck to it, and things worked out fairly well.

I love golf, because it's you vs. a stupid little ball. I like solitary sports where you interact with a ball or machine. Guess that's why I like dicking with computers too. In golf, I alternate between sweet-talking the ball, and cussing it out (same with my computers!), but it's definitely more of a war for me than a love affair. I'm in no way the first guy to play the "golf as a metaphor for life" card, and none of these ideas are original or revolutionary, but I'll lay 'em out for my own record keeping if nothing else.

Before You Get Started: take all the shit out of your pockets, turn off the phone, and get ready to play the game sans distractions. In the game of life, what things are these sorts of diversions that have nothing to do with what you're trying to accomplish? I've got a neat iPhone app that caddies for you, but I left it in the bag 'cause it's a gimmick and just complicates things. Also, are you hungover? Are you gonna freeze your nads off 'cause you didn't bring a jacket? Do you hate the guys you're playing with? I'm not saying things need to be ideal all the time, but are you setting yourself up for failure?

Step One - Survey the Scene: stand away from the ball and figure out what you need to do. Where's the danger? Sand traps on the right? Woods off to the left? Wind gonna shorten your shot? What club will get you that distance? In life, this would be stepping back and taking stock of your situation figuring out where you wanna go. What exactly are you trying to accomplish, and what things do you need to be cognizant of to make it happen? I like to actually imagine the plan being carried out and watch it happen a couple times in my mind. Be specific about where the ball needs to go. Mentally rehearsing is important.

Step Two - Work Out the Details: stand next to the ball and get your stance and grip right. Lately, I tend to move any leaves or sticks near the ball that might distract me while I'm setting up. I hate to rare back to hit the ball and then see something and think "ham sandwich!!" and smack it in the water. This phase is for focusing on execution. You've made your plan, and whether it's the best plan or not, you commit to it and that part's out of your mind - it's set in stone. If not, you gotta step back away from the ball and do it all over again.

Execution's key here, but don't get lost in the details. Take a couple practice swings, imagining the ball doing what you intend it to, but then step up and whack the ball. Practice swings are great, but taking 20 of 'em is silly, and counterproductive. There's also no sense in doing any of this if you're waiting on the guys ahead of you to clear out. Doing so dissipates your concentration and mojo.

Postmortem - did it work? We hope it did, but you can't hit 'em in the hole all the time. What failed? Did you plan great but bone the swing? Did you smack the shit out of the ball but not account for the wind or the terrain? If everything worked out as intended, tell yourself that if Mr. T and MacGyver had a kid, he still wouldn't be as badass as you. Then move on to the next shot.

For me, each shot is a mini round of golf, and each round of golf is part of a larger whole of the journey to get better. I'm just now grasping this, but it's the small details that add up to winning. A good shot here, a good strategy there, and you're shaving strokes off and getting ahead. Life seems to behave along these lines too, where you should always have an aim and a plan, but know that you'll rarely hit it 100% dead on. But you're preparing yourself for it to happen. Getting closer and closer, and then they go in once in awhile - and life or golf is a lot of fun.

Extras - these things are crucial to the game (or life), but aren't necessarily part of the play itself: